CAMERA’s Israel office yesterday prompted significant improvement of an Associated Press story which misleadingly reported that Israel has not taken responsibility for vaccinating any Palestinians. In fact, Israel has taken full responsibility for vaccinating all Palestinians aged 16 and up residing in Jerusalem, and has also vaccinated more than 100,000 Palestinians workers employed in Israel or Israeli communities across the Green Line.

Israel, whose own vaccination campaign has been a success, has been broadly criticized for refusing to accept responsibility for vaccinating the Palestinians. Rights groups say that under international law, Israel remains responsible for Palestinians in areas it occupied in the 1967 Mideast war, including Gaza, the West Bank and east Jerusalem. Israel says interim peace accords absolve it of that responsibility and that this is particularly true in Gaza, from which it withdrew in 2005, while keeping tight control over borders. 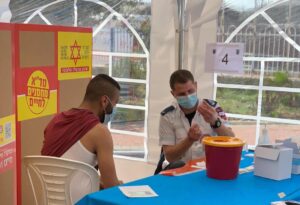 A Palestinian worker receives the coronavirus vaccine at an Israeli-run facility, March 8, 2021 (Photo from COGAT)

AP agreed that the paragraph was misleading, and commendably inserted the following clarifying sentence before the final excerpted sentence: “Israel has vaccinated Palestinians in annexed east Jerusalem and inoculated some 100,000 West Bank laborers who work in Israel and its settlements.”

CAMERA’s timely action vis-à-vis AP’s article yesterday underscores the value of the organization’s monitoring and responding to wire stories in the same news cycle as they appear. With this preemptive work CAMERA helps prevent misinformation from appearing in media outlets around the world. Indeed, the amended version appears in The Washington Post and Toronto Star.