JERUSALEM, ISRAEL – CAMERA, the Committee for Accuracy in Middle East Reporting in America, announced the expansion of its Israel operations with the opening of its Jerusalem office this week. The new facility will serve as the center for CAMERA’s presence in Israel and will enable increased activity in promoting accurate coverage of Israel and the Middle East in the North American, European and Israeli media. 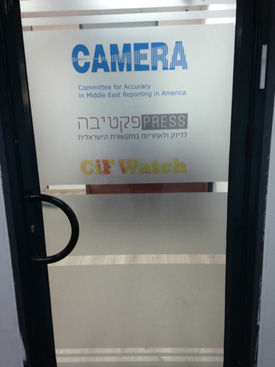 CAMERA, Presspectiva, CiF Watch and BBC Watch are responsible for securing countless corrections in leading  print and broadcast outlets on key subjects such as Palestinian prisoners, Israeli policies towards the Gaza Strip, United Nations resolutions, sensitive holy sites, and many others. Staff members regularly communicate with journalists and publish op-eds and letters to the editor which clarify and focus on topics frequently misrepresented by mainstream media reporting.

“In the last nine years, certain Israeli news editors have internalized an important lesson. If at one time they thought they were better off disregarding our findings, they now realize it is in their interest to respond to our calls for accountability and accuracy,” noted Tamar Sternthal, Director of the Israel office, who joined CAMERA in Boston in 1999 and subsequently opened CAMERA’s virtual office in Israel in 2004.

CAMERA and Presspectiva have submitted several complaints to the Israel Press Council, resulting in corrections made by Israeli media outlets. “All too often, misinformation appearing in the international media originated from Israeli sources, underscoring the importance of Presspectiva’s work,” said Jerusalem native Yishai Goldflam, Editor-in-Chief of Presspectiva.

“The establishment of the Jerusalem office is the natural next step in the ongoing growth of CAMERA’s global efforts. We look forward to hosting events and conferences for both the Hebrew and English-speaking public,” stated Andrea Levin, President and Executive Director of CAMERA, from the organization’s Boston headquarters.

This is sidebar for News — test